We encourage you you to participate in the screenshot contest organised
by player Hand of Blood. The prizes include up to 60 premium days!
You can read more about the competition in the topic on the forum
in the media section.
Changelog
10 Jan 2023 - An emergency save system has been implemented in order to prevent rollbacks in some scenarios (check the latest news for more information). House auctions and premium time have been extended. Check full changelog...
Dear Players,

as you all noticed, obviously, we have been experiencing major technical issues lately. In this post, we'd like to shed some light upon that.

But firstly, we'd like to thank you for all the supportive voices and offers of help, especially those to whom we couldn't respond personally due to the lack of time. We really appreciate all the good words, they've been the greatest motivator for us in this struggle. Secondly, we would like to take this opportunity to assure all players who recently joined Tibiantis that the last few days are highly unrepresentative of how Tibiantis usually operates. In fact, this is the first such situation since the server's launch in 2020. Back then, we also experienced an issue that forced us to restart the server twice. A lot of people were put off, understandably, but we managed to handle it aptly, and since then until just recently, we have not had ANY so-called "rollbacks" or other major issues. We'd like to emphasize this fact also to our long-time players, and ask them not to lose their trust in us. Technical issues affect all games and every companies from time to time. While every effort is made to avoid them, please realise that this is not always possible. Despite this being quite a large issue, we still think that once every 3 years is a relatively low and favourable rate. ;) 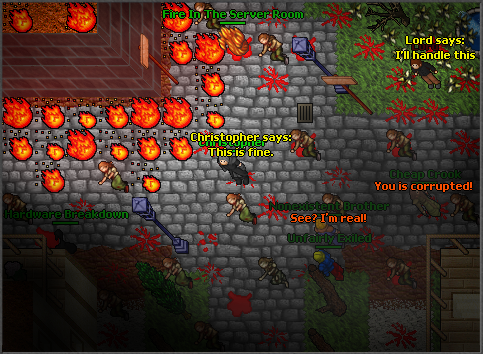 In the recent weeks we were forced to perform a rollback four times: Dec 13th (ca. 2 hours), Jan 3rd (ca. 2 h), Jan 7th (8 h), and Jan 8th (6 h). We are fully aware of the amount of disappointment and frustration this brought about, and, again, we apologise for all the inconvenience and emotional distress. What is important here to note is that these four issues were NOT one and the same problem that's been around for over a month, nor were they caused by one. The first two cases were the result of the hosting company simply shutting down one of our machines for their own maintenance without notice. Normally, such situations were preceded with a notification about the scheduled works, but this was not the case here. Therefore, to prevent similar cases in the future, we began to monitor their work schedule continuously instead of just relying on the notifications. This concludes the story of the first two rollbacks. There is really nothing more to that, and any further problems had nothing to do with it - just an unfortunate coincedence that they happened one after the other.

The issues from 7th and 8th January, however, did have one common cause, and it was the first time it occured. We managed to backtrace and reproduce the direct reason for the server going zombie, which involves a bug in some old external libraries (that we cannot easily update without probably breaking the compatibility elsewhere). We cannot yet pinpoint the initial trigger for the whole chain reaction. Because it has never come up before and the game server's code hasn't been changed in a long time, it must be caused by a very rare edge scenario that has just never occurred in the past 3 years. But to cut your losses and avoid another rollback in case this issue be triggered again, we implemented and successfully (so far) tested a procedure of an emergency save. Should such a situation recur, the game server will be brought to a halt, all players will be logged out safely, and all the characters and the map will be saved just like during a regular save. The only consequence will be a short reboot WITHOUT a rollback. In other words, you will not lose your progress - not even one lootbag because the map will be saved without the refresh. On that account, the game server will be back online today (Jan 10th) at 10 p.m. CET.

Regrettably, because we didn't have such a solution before, the game will now have to pick up from the last stable save, i.e. from 8th January, 09:00 a.m. CET. This refers to the in-game changes only - all the changes made after that time by the website (including all transactions) remain unaffected. House auctions have been extended so that the remaining time corresponds to that which was left before. All premium accounts, as well as accounts that were active that day, also received extra premium days. As a side note, we mentioned previously a possible change of the hosting machine, but we're dropping this idea for now. Thorough diagnostics revealed no hardware issues, and eventually we were able to reproduce the same problem on a testing machine, so changing the host now would be pointless.

The end of the year is always a good opportunity to have a great deal of fun, but it's also the time of reviews, recapitulations, and new plans and goals. In the past year, we successfully finalised a few large projects, the most significant being introducing a new website and the long-awaited Ankrahmun rework. Admittedly, you had to exercise an abundance of patience - the more reason to be glad that the final results were eventually met mostly with enthusiasm and enjoyment. The past year was also the witness to our highest number of online players so far. We hope to break this record yet in the future, because despite our great pride in what we've accomplished and built together with all of you, we still believe that the heyday of Tibiantis is yet to come! 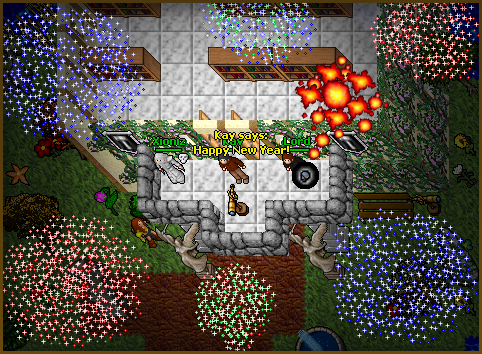 It has also been the third year in a row to hold the record for the highest number of cheating-related bans. On the one hand, we take pride in this fact, because it shows that despite facing the more and more elaborate and skilful means of cheating, we continue to maintain our efficiency in their detection. On the other hand though, we cannot shake the feeling that behind each of almost a thousand account numbers we banned last year is a player who'd have happily found their place amongst us, had they changed their motivation a little. This would also contribute to breaking the online records. This feeling doesn't shake our firm attitude against cheating though, but maybe it will dissuade someone from their wicked intentions? Please do not forget that even a tiniest act of unsporting behaviour is still cheating. Each fish caught using a macro, each second played on two characters simultaneously - they all can contribute to the new record number of bans. We sometimes face opinions that our approach is too radical, but we're certain that many of you witnessed games lose their entertaining value or their general purpose altogether - including the one whose name we'll refrain from mentioning ;) - and this is something we all have to keep in mind.

Another reason we're mentioning this is that it determines our further plans. The hoped-for game or website updates are by all means very important, but they're only a fraction of what we do. That part of our job that is less conspicuous costs as much effort - but we often abstain from sharing information on it, assuming that some plans best unfurl in silence. This time, however, we'd like to make a little exception. Introducing new methods of eliminating cheaters and improving the overall stability have always been our top priorities. In these areas we managed to progress greatly in the past year, but we intend on taking it to a whole new level in 2023 - we're calling in the big guns. :)

This is not, however, the limit of our plans! Since we announced to release a large content update per year, there's going to be one in 2023 as well. The details will be revealed in due time, especially that the game already - and still! - holds so much that is yet to be uncovered. But we are making note of this as a reminder that the development of the game's content continues, and we have very specific plans for the future. Although we prefer the term "expansion" since the goal of the updates is not to evolve into something completely different but to provide a breath of fresh air and a bit of variety to the old good nostalgic "7.4". Paradoxical as it may sound, expect the year 2023 to bring you news and updates of nostalgia and reminiscence!